The Carlyle Hotel is having a Surrealist moment. Two art galleries on the premises have mounted sumptuous shows on the subject, and they play off each other beautifully. 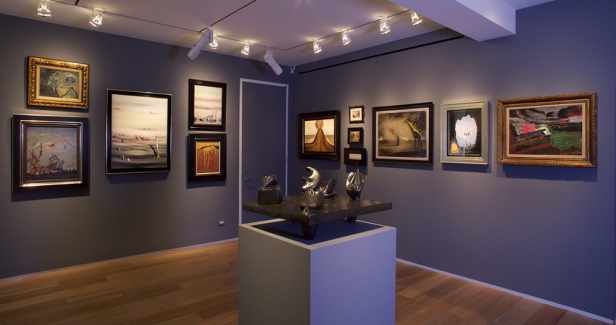 “Fields of Dream: The Surrealist Landscape,” open through Saturday, blankets the walls at Di Donna, a gallery one flight up from the Carlyle Room, with 68 works by 31 artists, from the movement’s best-known practitioners to acolytes. Most of the material on view has never been exhibited in the United States.

Encyclopedic in scope, the exhibition opens chronologically with a 17th century anthropomorphic landscape after Matthäus Merian the Elder, and unravels into the fertile territory of how the Surrealists expanded upon the genre of landscape. Similarly, Salvador Dalí’s Mysterious Mouth Appearing in the Back of my Nurse, 1941, presents figures in a landscape oddly composing a female head. Greek born, Italian artist, Giorgio de Chirico’s Méditation matinale, painted in Paris in 1911-12, is a melancholic cityscape whose vantage point looks out onto the sea, echoing with mysterious nods to antiquity. His metaphysical works became exemplary for the Surrealist movement, rekindling an interest in deep pictorial space. In his Thébes,1928, a classical Greek temple and ruins sit upon a rocky landscape, uncannily staged in a domestic interior replete with wood parquetry.

The Helly Nahmad Gallery, at street level, has mounted the equally profuse “Mnemosyne: de Chirico and Antiquity,” through Jan. 30, built around 22 paintings from the 1920s by Giorgio de Chirico, whose haunting canvases from the 1910s spawned Surrealism. Also here are 40 examples of Greek and Roman antiquities, whose forms, themes and poses echo across the artist’s canvases. The objects range greatly in terms of time, place and material; all are from Phoenix Ancient Art, an antiquities dealer with an office in New York and a gallery in Geneva, which organized the show with Mr. Nahmad. Both of these galleries have faced more than their share of legal problems in recent years.

The Surrealists, led by their gatekeeper, André Breton, savagely denounced de Chirico’s work after 1918, establishing an attitude that lasted for decades. The Museum of Modern Art’s 1982 de Chirico survey barely made it to the late 1920s, or a half-century before his death, in 1978, at age 90.

Interestingly, one gem of the Di Donna effort is de Chirico’s “The Two Suns,” a wonderful late painting from 1969 in which art triumphs over life: A vivid sun blazes from the artist’s easel while a black one sets over the city beyond. Another curiosity: a tender little 1939 rendering in crayon and pencil of a 1914 de Chirico painting by none other than Breton.

The Di Donna show confirms that landscape gave greatest range to the Surrealist imagination, its deviations from reality and flirtations with abstraction. As expected, there are impressive works by Salvador Dalí, René Magritte, Yves Tanguy and especially Max Ernst, whose inventive versatility shines here, for example, in a rocky outcropping rendered in hallucinatory striations of brash color and a page-size gouache that might almost be a photograph of geological strata.

But the unfamiliar holds sway, including a 1948 nocturne, “À la Lumière Luniere” by Man Ray, achieved by darkening the grain of a plywood panel and adding a moon, along with works by Oscar Domìnguez, Wolfgang Paalen, Enrico Donati and Antoni Tàpies. Victor Brauner is represented by a stark erupting volcano and the Surrealist women are out in force: Leonora Carrington, Dorothea Tanning, Jacqueline Lamba and Leonor Fini. A 1961 relief by Kay Sage is made of actual wood and stones that at first reads as painted trompe l’eoil, a nice play on the many forms of illusionism here.

White marble sculptures of melancholy, reclining goddesses often preside over de Chirico’s deep-shadowed piazzas of the 1910s. But as the Nahmad show indicates, in the 1920s, the artist, who was born in Greece and spent some of his childhood there, turned to figures of flesh and bone. Rosy-skinned gladiators, wrestlers and soldiers in togas and occasionally helmets prevail here, along with bearded philosophers. The young men are in pairs and groups fighting, hanging out in classical settings or promenading with horses whose opulent tails and manes evoke both Delacroix and My Pretty Ponies. There’s often a homoerotic buzz in the air, and a comic-heroic one, too. These dismayed the Surrealists, along with de Chirico’s fluctuating, exploratory paint-handling, an array of feathery or squiggly strokes that merge Impressionism, Rococo and cartooning. 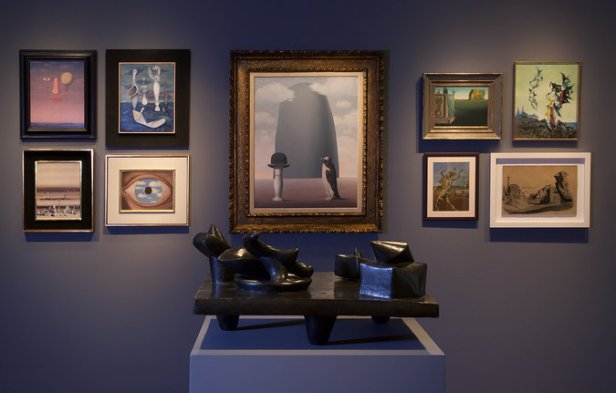 The Phoenix antiquities give de Chirico fierce competition. Stretching from Geometric Period bronze horses to Roman mosaics, they include several impressive Hellenistic statuettes. They reflect the ebb and flow across the Greco-Roman world of the real and the ideal, the sophisticated and the provincial. But the best de Chirico, from 1927, tiptoes into the present with an easy chair, cabinet, bed board and a scrap of a marble post and lintel. It would be great to have a clearer idea of what happened to his art between this painting and “The Two Suns.”

5 thoughts on “The Carlyle Hotel is having a Surrealist moment”

This site uses Akismet to reduce spam. Learn how your comment data is processed.